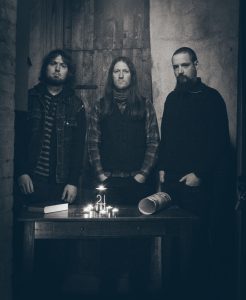 “If you’re a fan of Kadavar then please meet your favourite new band.” The Sludgelord

“If like me you were bitterly disappointed with Sabbath’s 13 and just longed for them to return to their roots and crank out something gritty, dark and fundamentally old-school then you really should pick up Cold River.” Ride With The Devil

Initially formed as an instrumental project by guitarist Rene Sitte and drummer Rene
Roggmann, after entering the studio in the summer of 2009 the Hamburg duo emerged with a recording of what would later become Mountain Witch’s debut album Scythe & Dead Horse. A sizeable slab of heavy desert rock and extended stoner jams, the ultra limited edition vinyl release that followed soon after sold out instantly, and three years on, this year’s rerelease on the German cassette only label Witches On Fire label quickly followed suit.

Since then Mountain Witch has not only recruited a third member in bass player Tobert Knopp, they have returned with a more focused and ambitious sound on their follow up album Cold River. Their first release on This Charming Man Records while that loose and low slung spirit of Scythe… still remains, it’s now strengthened by an unmistakable 70s psych rock majesty. With vintage tones and killer riffs reminiscent of early Sabbath, their new direction also takes in the boogie of Blue Cheer, ballsy strut of Deep Purple and the total ambition of Pink Floyd. A sound that doesn’t shy away from its hard rock roots and at the same time doesn’t stop long enough to rest on them.

A more structured record than anything they’ve ever laid down before, Cold River’s newest and most noticeable characteristic can be heard in the addition of Rene Roggmann’svocals and darkened lyrics. Lysergic tales spun out over haunting grooves that never stray far from the arcane acid jams that inspired them originally and can be heard here echoing across ‘Ancient Light’ and the curiously titled ‘Shrubbery The Warlock’.

There’s also a distinct feeling that while the Mountain Witch of old were content to plug in and rock out, the epic guitar assaults and rhythm and doom sections of ‘Sleepers Chant’ and ‘The Covey’ give this latest incarnation a newfound purpose. One that could give the likes of Dead Meadow, Uncle Acid and former label mates Kadavar a serious run for their money.
Trading in the cosmos for the kingdom on Cold River, Mountain Witch is out for the
crown and it’s only a matter if time before they take the empire.

This Charming Man Records is an independent record label from Muenster/Germany. We work with Cargo Records Germany, Sonic Rendevouz (NL/BE), Day After, Cobraside (US), Code 7 (UK), Season Of Mist (FR) and Green Hell Records as our distribution/wholesale partners.
feel free to get in contact for wholesalerates
cheers
TCM

listen to some tunes

Subscribe to the TCM mailout & never miss a single thing!

there is a "thank you" gift waiting for you...
...just subscribe now & get a discount coupon code. Don't miss out on this and check the spectacular internet world of this charming man
(Attention: only for all new mailinglist rookies!)
SUBSCRIBE here
We will never spam you, and you can unsubscribe anytime.
This site uses cookies: Find out more.