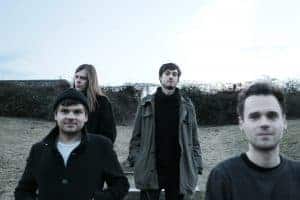 (POSTPUNK/80s) forget about Hamburg because Swabia did it again! Well, not completely alone but the influences of the Swabian Alb are clearly noticeable. There’s a reason why “Kevin Kuhn has a lot to do”became a running gag in the town of Esslingen. After Die Nerven,All Diese Gewalt, Human Abfall, it’s now time for Karies – four guys scattered over Leipzig and Stuttgart.

Their debut album will be released in October and let me tell you, it’s really good, promised! You can hear that they are musically related to Die Nerven and there’s also a lyrical connection to Human Abfall – probably not only because they are from the same part of the country but also because they are friends and have worked together (Die Nerven’s Max Rieger produced this record).

This Charming Man Records is an independent record label from Muenster/Germany. We work with Cargo Records Germany, Sonic Rendevouz (NL/BE), Day After, Cobraside (US), Code 7 (UK), Season Of Mist (FR) and Green Hell Records as our distribution/wholesale partners.
feel free to get in contact for wholesalerates
cheers
TCM

listen to some tunes

Subscribe to the TCM mailout & never miss a single thing!

there is a "thank you" gift waiting for you...
...just subscribe now & get a discount coupon code. Don't miss out on this and check the spectacular internet world of this charming man
(Attention: only for all new mailinglist rookies!)
SUBSCRIBE here
We will never spam you, and you can unsubscribe anytime.
This site uses cookies: Find out more.